North America’s largest soaring land bird; the California condor (Gymnogyps californianus) is also one of the most endangered birds in the world. Rarely flapping their wings in flight, they are superb gliders that can cover enormous distances each day.

The California condor once ranged over much of western North America, from British Columbia to northern Baja California and east to the Rockies. In the past two centuries the number of condors plummeted as a result of collapsing marine mammal populations, direct shooting, and poisoning by both cyanide laced bait carcasses and inadvertent ingestion of spent lead ammunition.

By 1987 the last wild California condors had been taken into captivity in an attempt to save the species from extinction. As a result of these captive breeding efforts there are just shy of 200 re-released condors in the wild—86 of which are co-managed by Pinnacles National Park. These birds typically nest in cliff caverns and lay a single egg on the bare subsurface, though some have also used redwood and sequoia cavities. Each condor is monitored closely after its release to increase chances of survival. Biologists ensure that they choose safe roosting sites, find feeding areas, and stay away from hazards such as power poles. 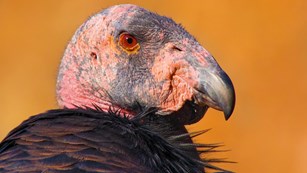 Get a closer look at California condors in Pinnacles National Park. 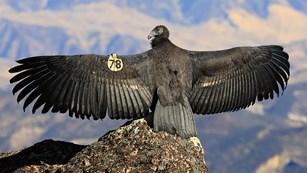 Get the latest on California condors from the Bay Area Nature & Science Blog. 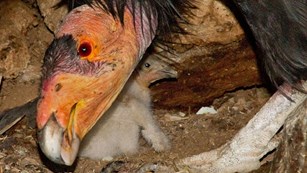