The Old Courthouse in St. Louis: Yesterday and Today 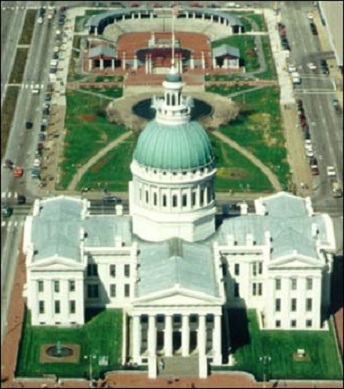 Grade Level:
Middle School: Sixth Grade through Eighth Grade
Subject:
Literacy and Language Arts,Social Studies
Lesson Duration:
90 Minutes
Common Core Standards:
6-8.RH.2, 6-8.RH.3, 6-8.RH.4, 6-8.RH.5, 6-8.RH.6, 6-8.RH.7, 6-8.RH.8, 6-8.RH.9, 6-8.RH.10, 9-10.RH.1, 9-10.RH.2, 9-10.RH.3, 9-10.RH.4, 9-10.RH.5, 9-10.RH.6, 9-10.RH.7, 9-10.RH.8, 9-10.RH.9, 9-10.RH.10
Additional Standards:
US History Era 4 Standard 1C: The student understands the ideology of Manifest Destiny, the nation's expansion to the Northwest, and the Mexican-American War.
Curriculum Standards for Social Studies from the National Council for the Social Studies
Thinking Skills:
Remembering: Recalling or recognizing information ideas, and principles. Understanding: Understand the main idea of material heard, viewed, or read. Interpret or summarize the ideas in own words. Applying: Apply an abstract idea in a concrete situation to solve a problem or relate it to a prior experience. Analyzing: Break down a concept or idea into parts and show the relationships among the parts. Creating: Bring together parts (elements, compounds) of knowledge to form a whole and build relationships for NEW situations. Evaluating: Make informed judgements about the value of ideas or materials. Use standards and criteria to support opinions and views.

What happens in a courthouse?

1. To explain why St. Louis was founded on the Mississippi River and the important role the city and its courthouse played in the westward expansion movement;
2. To identify and discuss issues significant to 19th-century railroad expansion to the western region of the nation;
3. To explain how a legal verdict – the Dred Scott Decision – can affect national policy;
4. To identify and describe a historic structure in their own community that has been rehabilitated and reused.

Time Period: Mid-19th Century
Topics: The lesson could be used in teaching units on America's 19th-century westward expansion, sectional conflict leading to the Civil War, or a variety of civics issues. Students will study the role the Old Courthouse in St. Louis played in national events of the 19th century

All persons intending to emigrate to Oregon are requested to meet at the Court House (in conjunction with citizens friendly to the cause) on Thursday evening next, the 7th inst., at half past seven o'clock.


Throughout the 19th century the Old Courthouse in St. Louis served not only as a house of justice, but also as a public gathering place for pioneers planning their westward trek across the plains. Thirteen courtrooms were in use from 1845 until 1930. The courthouse dominated the city's skyline until the turn of the 20th century, when skyscrapers rose to challenge it. The iron-framed dome was the forerunner of many similar domes erected on government buildings throughout the country. For many years the courthouse rotunda was one of the largest and most ornate rooms in St. Louis, and it was used for many city activities.

An editorial in the Missouri Republican of May 2, 1855 read, "the Rotunda...is well adapted to popular assemblies. No room of the same dimensions in the city is better suited to the voice. In the upper tiers every word uttered with common force is plainly distinguishable." At a time when commercial amusement was limited, public events held at the courthouse were well attended. Debates, speeches, and even court proceedings were considered forms of entertainment. This 19th-century courthouse brought national concerns to the people and provided a forum where they could actively participate in the shaping of their country's future.

The Old Courthouse in downtown St. Louis was the site of many events that had national repercussions. For example, in the 1840s and 1850s, the courthouse's rotunda was an arena for great speeches, debates, and discussions on the possibilities of building railroads across the continent. During this same period, one of the courtrooms was the setting for the portentous Dred Scott trial.

The courthouse as it exists today took nearly 40 years to complete. The original brick structure built in 1828 soon became too small for the growing city of St. Louis. A classical Greek Revival design that incorporated the brick courthouse as its east wing was opened on Washington's birthday, February 22, 1845. Throughout the years the courthouse continued to be remodeled and enlarged. The brick east wing was eventually replaced and another larger, more elaborate dome was designed and constructed. Not until July 4, 1862 was the courthouse declared officially complete. It was the tallest and most impressive building in St. Louis, rising more than 190 feet.

Getting Started Prompt
Map: Orients the students and encourages them to think about how place affects culture and society
Readings: Primary and secondary source readings provide content and spark critical analysis.
Visual Evidence: Students critique and analyze visual evidence to tackle questions and support their own theories about the subject.
Optional post-lesson activities: If time allows, these will deepen your students' engagement with the topics and themes introduced in the lesson, and to help them develop essential skills.

Gateway Arch National Park
The Park site provides an overview of the Dred Scott Case as well as information about the African American community in St. Louis at the time and slavery in Missouri.

Teaching with Historic Places Lesson Plans
Explore the concept of freedom in the antebellum United States by learning about Mary Ann Shadd Cary, an African American woman born free in a slave state, who also lived through the Dred Scott Decision. The Lewis and Clark Expedition: Documenting the Uncharted Northwest lesson plan explores the movement of Americans into the western part of the continent.

Email us about this lesson plan

Teach Civics with This Lesson