Delaware and the 19th Amendment

Women first organized and collectively fought for suffrage at the national level in July of 1848. Suffragists such as Elizabeth Cady Stanton and Lucretia Mott convened a meeting of over 300 people in Seneca Falls, New York. In the following decades, women marched, protested, lobbied, and even went to jail. By the 1870s, women pressured Congress to vote on an amendment that would recognize their suffrage rights. This amendment was sometimes known as the Susan B. Anthony amendment and became the 19th Amendment.

Delaware played an important role in the struggle for suffrage. Notable suffragists from the state include Mabel Vernon and Florence Bayard Hilles. Vernon met suffragist Alice Paul while attending college. Together, the two helped found the National Woman’s Party and organized national protests for women’s suffrage. Vernon also traveled around delivering speeches about the importance of women’ suffrage. Florence Bayard Hilles attended one of these meetings and was inspired by Vernon’s words. The two became friends and worked with the National Woman’s Party to advocate for women’s rights. Hilles led groups of Delaware women to the US Capitol in Washington, DC to protest. During one protest in 1917, Hilles and seven other Delaware women were arrested and imprisoned in the Occoquan Workhouse in Virginia. President Woodrow Wilson pardoned Hilles after 3 days.


Although many Delaware women joined national suffrage demonstrations, there were also events in the First State to campaign for Votes for Women. At 3:00pm on May 2, 1914, a parade of 400 suffragists marched northeast along Market Street in downtown Wilmington, Delaware to Rodney Square. With the suffrage colors of “purple, yellow, and white… displayed in some store windows. “According to a local newspaper, “The culminating event was most gratifying to the local leaders who have worked untiringly for the success of this” parade. It was the first major public suffrage demonstration in the state of Delaware. The parade also happened to be the first major public demonstration of the Wilmington Equal Suffrage Study Club (WESSC), a suffrage organization composed of black women. The WESSC marched at the rear of the parade, in a segregated unit.

The significance of the WESSC’s place in history is just as telling as their place in the march. Formed just over a month before the May 2nd parade, the WESSC’s involvement in the parade was literally wiped from the historical record and public memory. Articles published by major white newspapers refused to note black women’s participation in the suffrage parade. A report of the parade drafted the following day—likely written by Mary DeVou, the informal historian of the Delaware Equal Suffrage Association—listed all of the parade’s various participants, including the “Equal Suffrage Study Club, composed of colored women,” before going back and crossing out “composed of colored women” in a bold, black line of ink.

Despite efforts to erase black women’s contributions to the suffrage struggle in Delaware, the work of the WESSC was essential in their attempt to see the “First State” to be one of the first states to ratify the 19th Amendment. Women like Fannie Hopkins Hamilton, Alice Ruth Moore Dunbar, and Blance Williams Stubbs continued to fight for suffrage public speaking, lobbying, and organizing.

Not all women and men in Delaware supported a woman’s right to vote. Members of the Women’s Committee of Delaware Opposed to Women’s Suffrage believed women should not be involved in politics. They argued that women had more important responsibilities such as raising children and taking care of the home. Like many states, Delaware was divided on the issue of women’s suffrage.

On June 2, 1920, Delaware voted to reject the amendment. But on August 18, 1920, Tennessee became the 36th state to ratify the amendment, ensuring that all across the country, the right to vote could not be denied based on sex.

Once women won the vote, the activist networks cultivated by the WESSC were reorganized as the League of Republican Women to educate and promote black women in their new role as voters. These established activist networks would only become more valuable to black women in Delaware in the face of voter disenfranchisement, racial violence, and efforts to achieve social and racial justice throughout the twentieth century.

On March 6, 1923, Delaware showed its support for women’s suffrage by belatedly ratifying the 19th Amendment.

In 1915, a bill in support of women’s suffrage was presented to the Delaware state legislature. Before state Congressmen voted on the bill, suffragists held a parade and gave speeches outside of the Old State House. Despite the efforts of local suffragists, Delaware politicians rejected the bill. As a result, Delaware women were left without voting rights. They had to wait another five years before the ratification of the 19th Amendment. The Old State House is listed on the National Register of Historic Places and is open to the public as a museum. 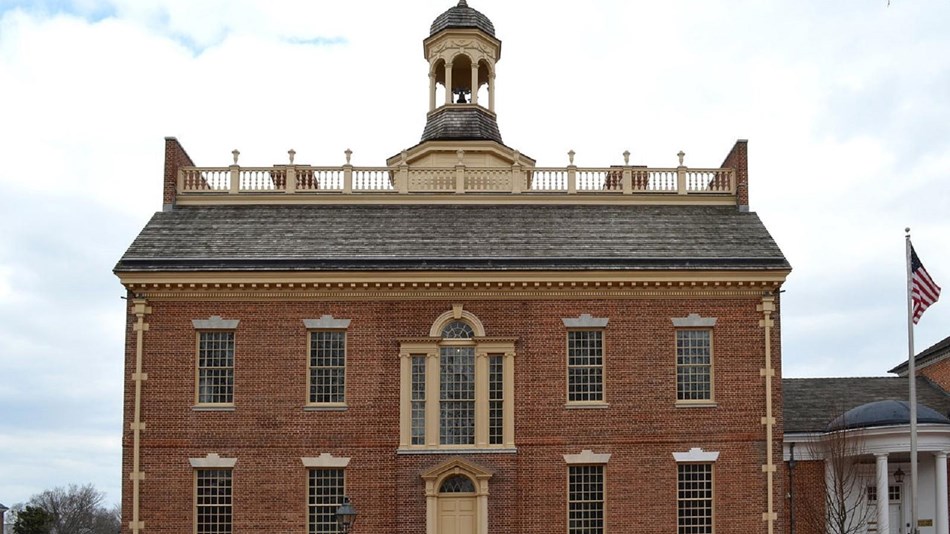 The Old State House is an important place in the story of ratification. It is listed on the National Register of Historic Places.